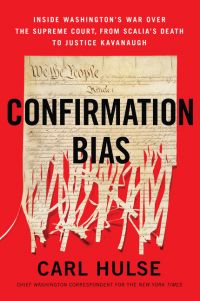 The Chief Washington Correspondent for the New York Times presents a richly detailed, news-breaking, and conversation-changing look at the unprecedented political fight to fill the Supreme Court seat made vacant by Antonin Scalia’s death—using it to explain the paralyzing and all but irreversible dysfunction across all three branches in the nation’s capital. The embodiment of American conservative thought and jurisprudence, Antonin Scalia cast an expansive shadow over the Supreme Court for three decades. His unexpected death in February 2016 created a vacancy that precipitated a pitched political fight. That battle would not only change the tilt of the court, but the course of American history. It would help decide a presidential election, fundamentally alter longstanding protocols of the United States Senate, and transform the Supreme Court—which has long held itself as a neutral arbiter above politics—into another branch of the federal government riven by partisanship. In an unprecedented move, the Republican-controlled Senate, led by majority leader, Mitch McConnell, refused to give Democratic President Barak Obama’s nominee, Merrick Garland, a confirmation hearing. Not one Republican in the Senate would meet with him. Scalia’s seat would be held open until Donald Trump’s nominee, Neil M. Gorsuch, was confirmed in April 2017.

Carl Hulse has spent more than thirty years covering the machinations of the beltway. In Out of Order he tells the story of this history-making battle to control the Supreme Court through exclusive interviews with McConnell, Harry Reid, Chuck Schumer, and other top officials, Trump campaign operatives, court activists, and legal scholars, as well as never-before-reported details and developments.

Richly textured and deeply informative, Out of Order provides much-needed context, revisiting the judicial wars of the past two decades to show how those conflicts have led to our current polarization. He examines the politicization of the federal bench and the implications for public confidence in the courts, and takes us behind the scenes to explore how many long-held democratic norms and entrenched, bipartisan procedures have been erased across all three branches of government.

Carl Hulse is chief Washington correspondent for the New York Times and a veteran of more than three decades of reporting in the capital. He has also served as the Washington editor of The Times as well as the chief congressional correspondent. Carl is a native of Illinois and a graduate of Illinois State University.