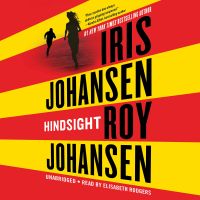 Investigator Kendra Michaels -- whose former blindness has left her with uniquely insightful observational skills -- must put her life on the line to catch a terrifying murderer setting his sights on some of society's most vulnerable in this electrifying new novel from the #1 New York Times and Edgar Award winning writing duo Iris and Roy Johansen.

Dr. Kendra Michaels, blind for the first twenty years of her life before gaining her sight via a revolutionary surgical procedure, is a renowned investigator known for her razor-sharp senses--honed during her years in the dark--and keen deductive abilities.

Now her skills are needed uncomfortably close to home. Two staff members have been murdered at a school for the blind where Kendra spent her formative years. But the murders are puzzlingly dissimilar: one victim was brutally stabbed, while the other was killed by a bullet to the head. Are the crimes related? Or is Kendra on the hunt for more than one dangerous killer?

With the killer (or killers) still on the loose, Kendra must put her life on the line to unravel a terrifying conspiracy. But Kendra soon discovers that she herself may hold the key to the deadliest secret of all..

Iris Johansen is the New York Times bestselling author of more than thirty consecutive bestsellers. Her series featuring forensic sculptor Eve Duncan has sold over twenty million copies and was the subject of the acclaimed Lifetime movie, The Killing Game. Along with her son Roy, she has also co-authored the bestselling series featuring investigator Kendra Michaels.

Roy Johansen began his professional writing career with his original screenplay for “Murder 101,”written in college and for which he won the national FOCUS (Films of College and University Students) award, a competition sponsored by Steven Spielberg, George Lucas, and Martin Scorsese. The screenplay was later produced for cable television and starred Pierce Brosnan, and the script was awarded the Edgar Allen Poe award in the Best Television Miniseries or Movie category. Johansen has since written screenplays for Warner Bros., Universal Pictures, Disney, and MGM, and, more recently, has written several New York Times bestselling mystery novels, including The Answer Man, Beyond Belief, Deadly Visions, Silent Thunder, Storm Cycle, Shadow Zone, and Close Your Eyes.